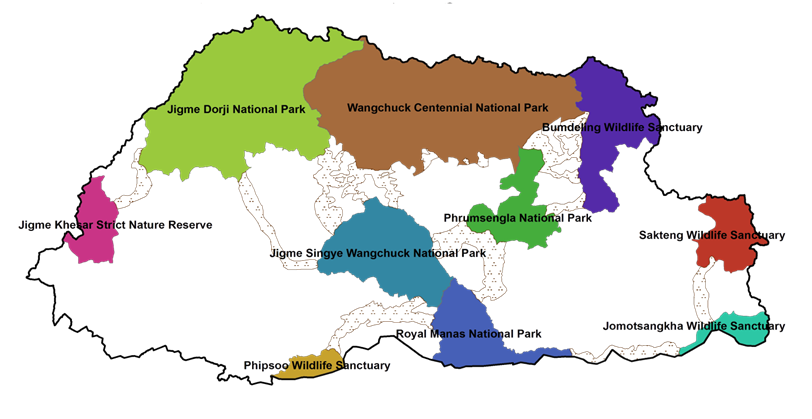 Gazetted in 1974 as a wildlife sanctuary, Jigme Dorji National Park (JDNP) is one of the oldest protected areas in Bhutan. Following the revision of protected areas nationwide, the park was officially upgraded to a national park in 1993 following which staffs were deputed to functionally operate it in 1995. Until the establishment of Wangchuck Centennial Park, JDNP used to be the largest national park with a revised area of 4,319 km2.

Third Largest Protected Areas with  1730 sq. km and The biologically diverse park has recorded the presence of 39 mammals, 270 birds, 139 species of butterflies, 16 fishes, and we are yet to establish the baseline for herpeto fauna, fungal diversity and diversity of orchids and herbal plants.

Gazetted in 1998 with an area of 905 km2 and with huge expanses of some of the last remaining stands of cool temperate broadleaved forests and old fir growth in the entire Himalayas, Phrumsengla National park is home to some of the worldâ€™s most endangered flora and fauna.

Wangchuck Centennial National Park (WCNP) was formally gazetted as a National Park under Bhutanâ€™s protected area system on June 10, 2008. It is the largest National Park amongst 10 Protected Areas in the kingdom of Bhutan with an area of 4914km2.

The Bumdeling Wildlife Sanctuary is located in the Northeastern part of Bhutan covering an area of 1520.61 km with 420km sq. of buffer zones ecosystem parts of Trashiyangtse, Lhuntse and Mongar Dzongkhag.

Jomotsangkha Wildlife Sanctuary (JWS) earlier known by the name Khaling Wildlife Sanctuary was notified in 1993. The sanctuary has an area of 334.73sq.km. It is located in southeastern part of Bhutan under Samdrup Jongkhar district.

Phibsoo Wildlife Sanctuary (PWS) is the smallest protected areas amongst the other Protected Areas in Bhutan with only an area of 269 Km2. In the year 1974 PWS was established as Phibsoo Reserved Forests and finally in 1993 it got upgraded to Wildlife Sanctuary.

Sakteng Wildlife Sanctuary is located  in easternmost part of the country under Trashigang District and was established in 2003. SWS spreads over a part of Merak, Sakteng ( Trashigang) and Lauri Gewog (Samdrupjongkhar) forming 740.60 skm.km with 146.08 sq. km area (19.37%) designated as a core zone.

JigmeKhesar Strict Nature Reserve which has total area of 609.51 Km2 is the only Strict Nature Reserve among the protected area in the country and is the gem within the protected area system of the country. It lies mostly in Haa Dzongkhag (five out of its six geogs), with a very small spreading south into SamtseDzongkhag (two out of its fifteen geogs).

This is the only protected area in Bhutan without permanent human settlements, except for few migratory Yak herding communities.

Biological Corridors were first established in 1999 and bestowed as a Gift to the Earth from Bhutan. There were initially 12 corridors with a total coverage of 3,660 km2 connecting all nine of Bhutan’s protected areas.  But with the establishment of Wangchuck Centennial National Park in 2008, three corridors were subsumed.

Bhutan’s Corridors represent a bold and innovative vision unsurpassed by any other nation on Earth. Thus, Bhutan can be rightly pointed out as a world leader in attempting to use Corridors as a cost-effective, reliable strategy to conserve meta-populations of wide-ranging species, promote gene flow for all species, and allow species to adapt to climate change. 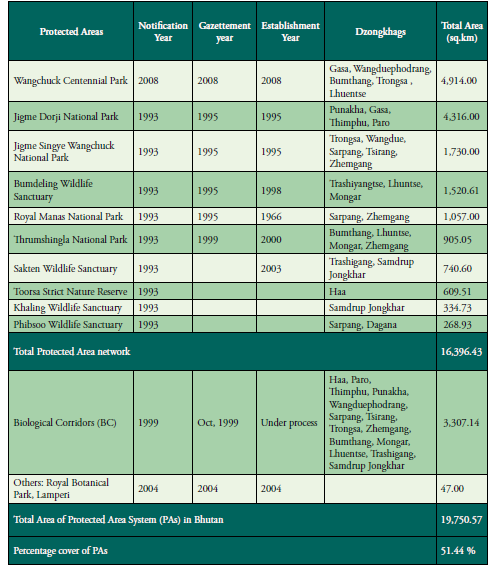 For more detail visit the link below