Asiatic Golden Cat (Catopuma temminckii) is one of the widely distributed wildcat species in Bhutan from lower subtropics to areas above 3,000m. It is one of the largest of all the other small cats geographically distributed over South Asia (Nepal, Bhutan, and North-Eastern India) through parts of China to South-Eastern Asia (Myanmar, Thailand, Indonesia, and Sumatra). The Asiatic golden cat is generally found in forested habitats with some records from scrubs, open rocky terrain, and grasslands from sea level to 4,000m.

The feeding habit of the Asiatic golden cat usually is nocturnal, and it feeds on birds, lizards, small mammals, barking deer, monkeys, and mouse deer. There are also records of hunting of sheep, buffalo calves, sheep, and goats, the prey larger than their body size. The wide range of distribution and food habits of the Asiatic golden cat is due to its adaptive physical modifications—they exhibit different coat color variations known as color morphs.

This finding was the result of the joint research project on resolving population estimation biases from camera-trap studies undertaken by the World Wildlife Fund and the Department of Forest and Park Services in collaboration with the Zoological Society of London, Panthera International, Flora and Fauna International, and the University of Southampton with a lead researcher from the Department of Forest and Park Services. The study site was in the Jigme Singye Wangchuck National Park and Royal Manas National Park in central Bhutan.

However, maximum captures were from the altitudinal range above 2000m.

The world of cats is as unique as it is diverse. The cuddly house cat purring peacefully beside the fireplace and the majestic tiger taking a snooze in the shade of luxuriant forest in the Himalayas belong to the same family, Felidae. Geneticists have found 37 different species of cats which fall under eight distinct lineages evolved over the past 10 million years.

Wild cats are magnificent ecosystem engineers, with most of them occupying the top position in the trophic. The role of small cats in controlling rodents population to the trophic cascade from big cats helps in the healthy regeneration of forests to maintaining the balanced ecosystem of the landscape. However, wild cats are one of the most conflicted animals with humans. Therefore, continuous monitoring and study of these wildcats are necessary for conservation intervention and mitigation of threats to their survival from negative interaction with the human settlements.

The study of wild cats in Bhutan dates back to the 1980s. The method adopted then was sign survey and interviewing local people. Over the years, with advancements in science and technology, camera traps are used as a passive monitoring tool.

Camera traps are “wildlife-friendly” with no or little disturbance to wildlife. Camera traps have been the primary tool used to study wildlife, capturing fascinating images and video clips of terrestrial species. Camera trap collects a wide range of data, including data on species location, population sizes, and how species interact in a landscape. Using statistical analysis information from camera traps provides empirical evidence for conservation intervention and decision-making.

Phrumsengla National Park captured the first camera-trap image of a tiger in Bhutan in 2000, and it was the first record of the Royal Bengal Tiger from the highest elevation (3000m). The first-ever systematic nationwide monitoring of the Tiger and Snow Leopard of Bhutan in 2015 and 2016 chiefly used the camera traps. The use of camera traps is now a gold standard method for monitoring wildcats worldwide.

Bhutan has 11 species of wild cats on record, nine confirmed, and the presence of lynx and fishing cats based on anecdotal sources. The camera traps had captured seven of the 11 species;

Considering that Bhutan only covers 0.03 percent of the earth’s surface, the number is even more fascinating. Jigme Singye Wangchuck National Park alone is home to seven wild cat species, possibly the world’s highest number of wild cat species sharing a single space in a landscape.

Interestingly, these species are present in all experimental grids monitored and retrieved so far.

Our preliminary judgment is that most small cats are found near human settlements where they have access to easy prey, and the big cats like tigers and leopards are found in deep forests where they mark their territory. While the iconic big cats receive due attention and conservation priority, small cats should not go into oblivion. They are an essential part of the ecosystem and are also globally threatened by habitat loss and anthropogenic pressures. They are small but beautiful. 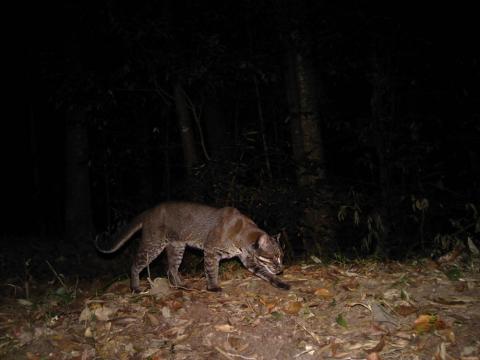