A Begonia species, new to the world is discovered after investigation of an old herbarium specimens at the Royal Botanic Garden Edinburgh. The species was discovered from Zhemgang by Phub Gyeltshen, a Forest Science student at College of Natural Resources, Royal University of Bhutan; Mark Hughes, Begonia expert, Royal Botanic Garden Edinburgh and Sherab Jamtsho, a Ranger at Zhemgang Forest Division. The first author also added 𝐵𝑒𝑔𝑜𝑛𝑖𝑎 𝑓𝑙𝑎𝑣𝑖𝑓𝑙𝑜𝑟𝑎, 𝐵𝑒𝑔𝑜𝑛𝑖𝑎 𝑝𝑎𝑛𝑐ℎ𝑡ℎ𝑎𝑟𝑒𝑛𝑠𝑖𝑠 and 𝐵𝑒𝑔𝑜𝑛𝑖𝑎 𝑔𝑒𝑚𝑚𝑖𝑝𝑎𝑟𝑎 species which are new records for Bhutan in 2021.

The new species is named as 𝐵𝑒𝑔𝑜𝑛𝑖𝑎 𝑏ℎ𝑢𝑡𝑎𝑛𝑒𝑛𝑠𝑖𝑠 which is derived from the country of its origin. It is currently known only from Zhemgang Dzongkhag but it is likely to be discovered from other Dzongkhags having similar habitats.

The Begonia species at the Royal Botanic Garden Edinburgh was said to be collected from Zhemgang [“Shamgong”] of Bhutan in 1985. The herbarium specimens were mistakenly identified as 𝐵𝑒𝑔𝑜𝑛𝑖𝑎 𝑟𝑢𝑏𝑒𝑙𝑙𝑎 Buch.-Ham. ex D.Don but it was concluded as a new species only this year after a thorough investigation by authors from Bhutan and Edinburgh. It has pink flowers and grows in the shady areas of warm broadleaved forest at around 1000 masl.

In Bhutan, the genus Begonia is represented by 13 species and with the addition, it has increased to 17 species. Bhutan is likely to harbour around 30 species of Begonia as many parts of the country are still under survey.

The discovery of such species is a clear indication that the country is rich in biodiversity and needs further exploration to have precise numbers of wild flora in the country.

As per the International Union for Conservation of Nature (IUCN) Red List categories and criteria, the species is Critically Endangered in the country. 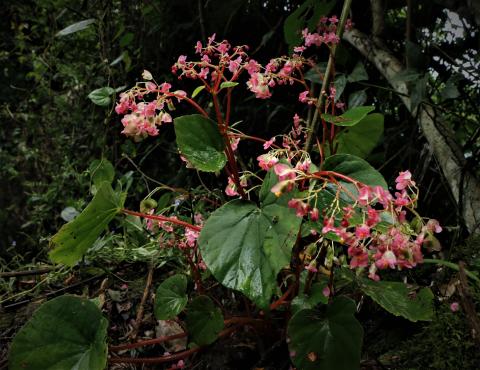